Leigh is back in the Dig for Victory for the Summer Season to share her top tips for a healthy and bountiful garden!

I know it’s July but I’m going to step back two months to when I planted the seeds. We had lots of sunshine, and too much rain, therefore we ended up with lots and lots of weeds! I couldn’t find where I planted the seeds.
For about a month, it looked as though the garden hadn’t had anything done to it, until the seedlings started to appear. Then I was frantically down on my hands and knees trying to weed out the invaders, and free the seeds!
Hey presto! We had marginally straight lines. They were straight (honest!) but the rains came and scattered the seeds. Hence the dog’s hind leg… 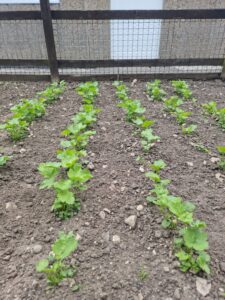 After the third lot of peas were planted, we’re still waiting of them to come. I’ve tried to grow the blooming things over and over, but they won’t grow – this seems to be a common problem this year.
Beans! Out of two rows, we have one bean so the rest of “Has Beans”. 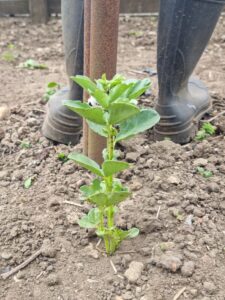 Courgettes are doing really well this year; they’re producing plenty of fruit – I think this is due the amount of rain as they are a very thirsty plant!
I’ve just noticed today, there are a couple of pumpkins coming which is great because I thought they were more courgettes! My darling little grandchildren swapped the labels out, so we didn’t know what was what! 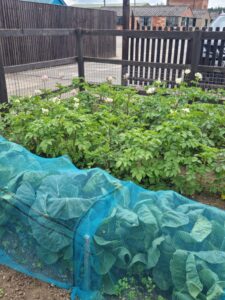 This year the brassicas has been netted to stop the butterflies and so far, so good. But we have got a pesky little rabbit living under the water tank. We did have two, but we think one overdosed on strawberries!
So far so good, the rabbit has been perplexed by the netting but it’s still nibbling at the spinach. We’ve nicknamed him “Peter”, and his days are numbered (Stifado is very nice!)
Spuds are doing great considering what was left over from last year’s potatoes; they’ve been re-planted. And now, all there is to do is just water and weed, water and weed, WATER AND WEED! Until you can harvest everything, of course.

Top Tip on weeding: The best way to weed is down on your hand and knees and get the root out. Failing that chop them off by their stocking tops!