With the outbreak of WWII services looked towards the women of Britain to commit themselves for the war effort, similarly in WWI women would take work on the farms, factories and in civil services, whereas normally all jobs like this would be reserved for men.

A massive variety of jobs opened opportunities for women to explore skills and interests that they may not have been able to show before; women played a huge part in sustaining the land while men would be fighting for their country. 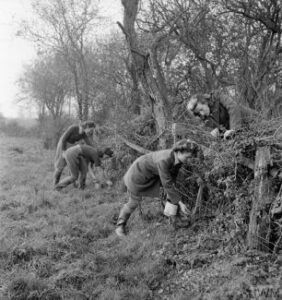 Land Girl Rat Catchers at work as part of their training on a Sussex farm. In the background Audrey Prickett and Betty Long plug a rat hole after inserting poison and in the foreground, Eileen Barry lays some bait, as Audrey Willis leans over the hedge to check she is doing it properly.

The Women’s Land Army, or as they were known ‘Land Girls’, were positioned in various farms up and down the country, originally set up for WWI they were rebooted again in 1939 with WWII looming, by August 1940 only 7,000 women had joined, which was not as many as hoped, however with attacks in the Atlantic, and ships being destroyed, this caused for a major necessity in working the land, with fears that the U-boat attacks would starve the country. 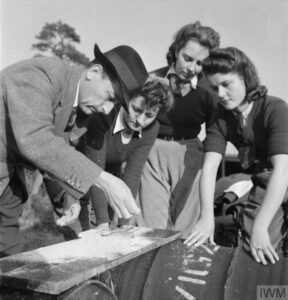 The WLA was advertised in a glamorous way, as most of the advertisement was suggesting it to be a glorious thing for women to do, however the truth of it was these women living in small farm cottages, a lot of the time without running water or gas; apart from this the WLA did have a good supply of food as they were in the countryside where many hares, pheasants and rabbit could be found.

The day to day uniform of a WLA Worker consisted of brown corduroy or whipcord breech, brown brogues, fawn knee-length woollen socks, a v-necked pullover, a fawn shirt and a brown cowboy style hat! A lot of the WLA used the uniform they had to make it suit to their own requirements. In the summer. The breeches frequently became made into shorts! Here at Eden Camp in our Archives and Displays, we have a lot of original WLA Uniforms! 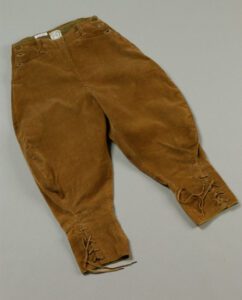 Typical pest control work was the applying of a pesticide powder, or spray, to apple trees, which was potentially dangerous work due to the temperamental nature of the mechanisms which were used to apply the powder or spray. Furthermore, with the help of farmers, Kramer accounts that the Land Army helped to eradicate the Colorado beetle. Another common task for the Land Girls was the catching of rats – much to the dismay of the more squeamish girls. The propaganda slogan of the time was ‘Kill That Rat: It’s Doing Hitler’s Work‘. The process involved the laying of sugared bait and clearing away the dead rats. 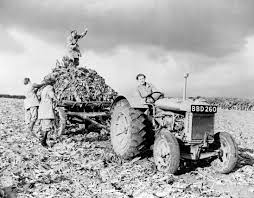 The Women’s Land Army was essential to keeping Britain going, and we thank them to this day for their hard work and dedication!