#ForgottenFriday – Ode to our Volunteers!

In today’s Forgotten Friday, in honour of the amazing volunteers we have here on site, we are focusing on the volunteers that served during the Second World War!

The Women’s Voluntary Service, known as the WVS, was and still is to this day a voluntary organisation concerned with helping people in need throughout England, Scotland, Wales, and Northern Ireland. 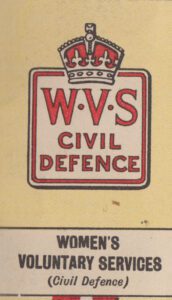 It was founded in 1938 by Stella Isaacs, Marchioness of Reading, as a British women’s organisation to recruit women into the Air Raid Precautions (ARP) services to help in the event of war. These women played an important part in protecting civilians across Britain during the Second World War. 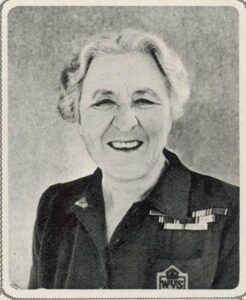 There were many jobs involved within volunteering with the WVS, including playing a key part in the evacuation of civilians from urban areas. The WVS had been asked to pinpoint areas of safety and billeting for evacuated children. Moving children out of the cities proved reasonably easy. However, getting them to a known area of safety proved a lot more difficult as trains did not always arrive at an expected destination or would turn up at a reception point unexpectedly. During the Second World War, the WVS helped move over 1.5 million people (the majority were children) out of cities in the early days of September 1939.

Not only did the WVS helped in the process of billeting evacuated children, but they also played a vital role in the collections required for those in need. In 1939, an appeal named ‘Bundles for Britain’ was created where large quantities of clothing were sent by the American Red Cross and distributed across Britain in WVS Emergency Clothing Stores. Similarly, when troops returned after the evacuation at Dunkirk, the WVS were there to greet them with a smile, handing out warm food, drinks, and clothing items. A lot of the time many of the WVS volunteers were based at railway stations where they would be extremely busy feeding returning soldiers before they left. 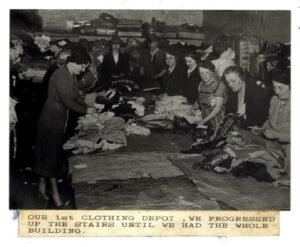 Captions reads: “Our 1st Clothing Depot. We progressed up the stairs until we had the whole building.”

Furthermore, the WVS were a huge part of the forces which helped during the Blitz bombings in British cities. On the arrival of the Blitz bombings, women in the WVS were quick at providing food and drinks all day and night. While ARP wardens and firemen fought the fires, women in the WVS set up mobile canteens to keep them refreshed. This meant that these women were placing themselves in serious physical danger with collapsing buildings a constant threat (you can see an example of this in Hut 21). When a raid ended, the WVS also played a part in looking after the injured and those who had lost their homes and families. It was known that the WVS helped over 10,000 people a night during the Blitz. 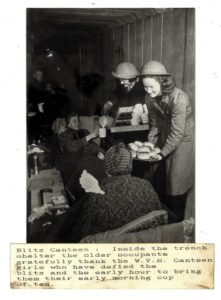 Caption reads: Blitz Canteen: Inside the trench shelter the older occupants gratefully thank the W.V.S. Canteen girls who have defied the blitz and the early hour to bring thm their early morning cup of tea.”

It would be difficult to overstate the importance of the work done by the WVS during the Blitz: the rest centres provided shelter, food, and importantly, sanitation. But working so near to the centre of the bombing inevitably led to casualties. 241 members of the WVS were killed during the Blitz and many more were wounded. It goes to show how important volunteers were during the war and how they contributed to the war effort on the home front.

Here at Eden Camp, we have many amazing volunteers who help across the whole museum, we would like to dedicate this Forgotten Friday to those who have contributed to keeping Eden Camp safe, clean, and enjoyable. We wouldn’t be here without them! THANK YOU!