In today’s #ForgottenFriday, we learn about the Link Trainer and the incredible man behind it!

Edwin Albert Link was born in Indiana, USA in 1904.
In 1910, he moved with his family to Binghamton, New York, where his father owned a business building pianos and organs. It was Edwin’s knowledge of pumps, bellows and valves, together with an enthusiasm for flying that led him to develop a flight simulator in 1929 using pneumatic bellows to control pitch and roll and a small motor-driven device to produce disturbances.

The Link Trainer, also known as the ‘Blue Box’ and ‘Pilot Trainer’, was produced from the early 1930s. In 1937, the first Link Trainers were delivered to the RAF, however, it was during World War Two that these simulators became famous, when they were used as a key pilot training aid by almost every combatant nation. Pilots could learn how to fly their aircraft in blind flying conditions such as cloud, fog and darkness – an essential skill known as Instrument Flying. A pilot could safely practice his skills flying entirely on instruments without having to be in the air. 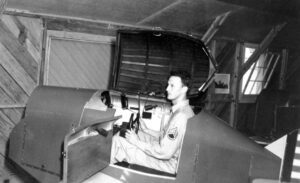 The Link Trainer was divided into 3 sections: the base, the fuselage and the instructor’s desk. The base of the Trainer housed the vacuum turbine, voltage transformer and wind drift mechanism. The fuselage was mounted on a universal joint which permitted bank, pitch and turn movement in excess of manoeuvres normally required of an aircraft during instrument flight. The universal joint was then mounted on a turntable, which allowed for indefinite rotation in either direction. The instructor’s desk housed the radio, which produced the aural and visual radio signals encountered in actual flight. Movement of the Link Trainer was achieved via vacuum operated bellows, controlled by valves which were connected through linkages to the wheel (or stick) and rudder pedals. The tachometer, air-speed indicator, vertical-speed indicator, altimeter, directional giro, and turn and bank indicator were also vacuum operated. 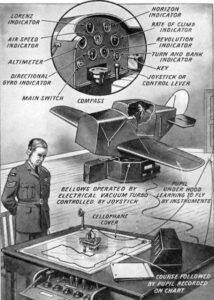 To increase familiarity with flight controls, the earlier systems used motion feedback. Pilots trained by sitting in a simulated cockpit, which could be moved hydraulically in response to their actions. Later versions had a “cyclorama” scene painted on a wall outside the simulator to provide limited visual feedback. It was not until the British Government commissioned the Celestial Navigation Trainer, in World War Two, that projected film strips were used in Link Trainers. However, these systems could only project what had been filmed along a correct flight or landing path, they were unable to generate new imagery based on a trainee’s actions. 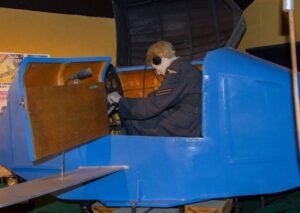 Different flying conditions could also be created by the instructor and the Link Trainer would also initiate a stall when recorded airspeed and attitude fell outside predetermined limits. It would then go into a realistic spin, with the instruments performing normally for such conditions. A cross-country “flight” of up to 200 miles was possible, during which the instructor was able to challenge the trainee with most of the difficulties that can occur during a genuine flight.

With further refinements along the way, the Link Trainer became a simple form of analogue computer, fitted with a full set of instruments to guide the trainee on an imaginary flight. It had an automatic recorder which was located on the instructor’s desk and was connected electrically and accurately traced on a chart or map the course ‘flown’ by the trainee. The automatic recorder travelled on 3 wheels, geared together in such a manner that directional control was effective with all 3 wheels at the same time.

In 1993, Eden Camp was donated an original Link Trainer which van be viewed in Hut 29.