There was a forgotten Home Army in Britain during the war, but they wore no uniform and received no medals: the Housewives of the Home Front.

Today things have changed very drastically, we have electronic equipment to assist in washing, drying and general household duties. During the Second World War this is very different, all household duties were left to the wife to attend too.

Back in 1939, genders were firmly divided by domestic roles and duties. The husband went to work and was the main ‘breadwinner’ of the family; he earned the family’s income. The men of the household did the more manual jobs around the family home and the general DIY. However, the rest of the housework – known as the three c’s, cooking, cleaning, and childcare – this was the previous duties left to the housewife. 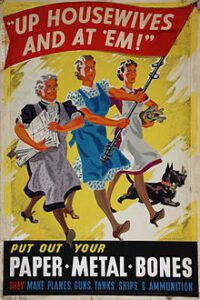 During the early stages Second World War it was quickly realised that the housewife’s workload and stress levels would rise. In November 1939, HR Queen Elizabeth (our Queen’s Mother)spoke via broadcast to the ‘Women of the Empire’ as a message of encouragement:
“I would say to all those who are feeling the strain: be assured that in carrying on your home duties and meeting all these worries cheerfully, you are giving real service to the country. You are taking your part in keeping the Home Front, which will have dangers of its own, stable and strong.”

Cleaning was far more laborious than it is today, it was taken for granted that most housewives were very ‘house proud’. Publicly mopping and scrubbing the doorstep was a sign of domestic pride by working-class women. 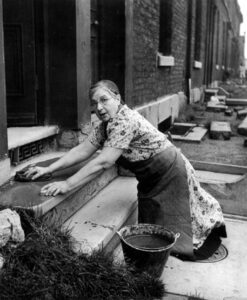 In addition to this, women regularly used a ‘dolly and posher’ to agitate the clothes, many used a wash board an rubbed the clothing and ran it through a mangle to wring them out. Here at Eden Camp, we have an array of washing equipment in our Prefab, including the wooden Dolly, Posher and Washing Board. 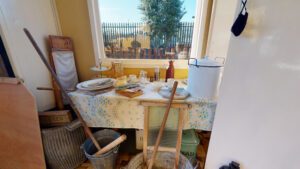 Clothes washing was tiresome for many housewives; soda crystals or solid blocks of soap led to worn hands. But gradually, more brands of washing powder such as Sylvan Flakes, with its ‘Do not destroy this carton, put it with the other wastepaper for the salvage collector’ instruction became available for the housewife. 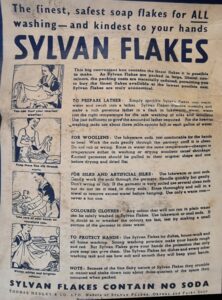 Although this miraculous home brand was a staple for many women the reason for its name is very unusual too. Six days before the disastrous Allied landing at Dieppe, France, on 19th August 1942, when 1524 servicemen were killed, an advert for Sylvan Flakes appeared in Newspapers with the heading ‘BEACH COAT from DIEPPE.’

An over-analysing agent at the Political Warfare Executive suggested that the six buttons on the coat pictured in the advert was the code that the raid was in 6 days, while the word ‘coat’ was short for ‘combine operations at’. M15 investigated both the makers of ‘Sylvan Flakes’ and the Graham and Gilles advertising agency. They deduced it was all an unfortunate coincidence.