This week’s #ForgottenFriday sees the launch of our ‘Share a Story’ month, where we bring to life some of the personal accounts we have here at Eden Camp! We will sharing written letters, photos, and stories through in different ways across our media.

Alongside the launch of our digital archive, we are opening the door and exploring the real people behind Eden Camp’s history!

This week we hear a brief account of Mary Denison’s memories living nearby to Eden Camp:

Mary was the eldest of the three children of William Peacock, who farmed at Espersykes.

She states, “Apart from being one of the nearest farms in the area, my father was also on the War Agricultural Committee and so it was not surprising we had Prisoners of War from Eden Camp working on the farm. I was a young girl at the time, but I do remember a regular flow of prisoners and my parents had no trouble, that I know of, [regarding them] working on the farm. 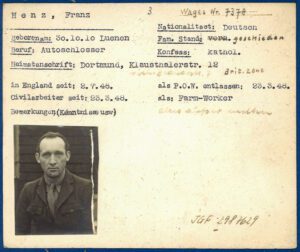 Example of a Farm Worker’s pass from Eden Camp.

“I do remember the day that the newspapers broadcast the finding of the horrors of Belson by the British Troops in 1945 and my father thought it was policy to gather up all the newspapers and try and keep them not only from the Prisoners of War, but also from our own men and avoid any possible recriminations.” 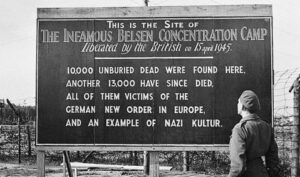 The Liberation of the Bergen Belsen Camp in Germany, 1945

“What does remain clear in my mind is a meeting with one of the POWs many years later at a barbeque in Esperdykes. This ex-POW had been very keen to come because he wanted to [see] us once again as we were the children of the farm he worked on. He reminded us of the presents that POWs used to bring for us and in particular some slippers he made for us. He took great delight in telling us that they had ‘acquired one of my father’s sugar beet sacks; stripped all the threads from the sacks; washed them and then made them up into slippers.’” 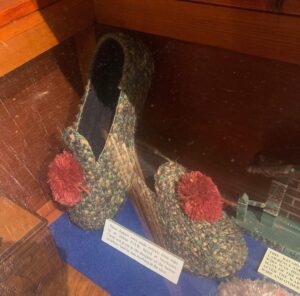 An example of slippers made by a POW. Note reads: These slippers were made entirely from rope by an Italian POW based at Northcave Camp, and given to the daughter of the framer on whose land he was working at the time”.

“He told me that they were so delighted to be able to see and talk to us three children because we were obviously [of similar] age with many of the children of the Prisoners of War this enabled them in a remote war to keep in touch with their own families by their contact with us and endeavouring to think about their own children growing up in the same way.’”