Today in commemoration we are looking into the September 11 attacks and its history and effect upon the whole world 20 years on.

Whilst our museum focuses predominantly on the events and lives throughout WW2, we also explore modern conflicts. Look out for more displays on the Falklands featuring our Scorpion CVRT, the only working CVRT to return from the conflict. Please note some of the following content may be distressing to some. 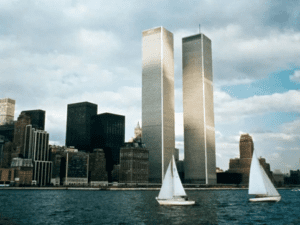 On September 11, 2001, 19 militants associated with the Islamic extremist group Al Qaeda hijacked four airplanes and carried out suicide attacks against targets in the United States. Two of the planes were flown into the twin towers of the World Trade Center in New York City, a third plane hit the Pentagon just outside Washington, D.C., and the fourth plane crashed in a field in Shanksville, Pennsylvania. Almost 3,000 people were killed during the 9/11 terrorist attacks, which triggered major U.S. initiatives to combat terrorism in post war conflicts such as Iraq.

At 8:46 am the first plane, American Airlines flight 11, which had flown from Boston, was piloted into the North Tower of the World Trade Center in New York City by hijackers. Most observers construed this initially to be an accident involving a smaller commuter plane, although, this later was found to not be the case. The second plane, United Airlines flight 175, also from Boston, struck the south tower 17 minutes later. At this point there was no doubt that the United States was under attack. Each structure was badly damaged by the impact and erupted into flames. Office workers who were trapped above the points of impact in some cases committed suicide by leaping to their deaths rather than face the infernos now raging inside the towers.
The third plane, American Airlines flight 77, taking off from Dulles Airport near Washington, D.C., struck the southwest side of the Pentagon at 9:37 am, causing mass destruction and a fire in that section of the structure. Minutes later the Federal Aviation Authority ordered a nationwide ground stop, and within the next hour (at 10:03 AM) the fourth aircraft, United Airlines flight 93 from Newark, New Jersey, crashed near Shanksville in the Pennsylvania countryside after its passengers informed of events via mobile phones, in their attempt to avoid the designated destination, the passengers attempted to overpower their assailants.

At 9.59 am the World Trade Center’s heavily damaged South Tower collapsed and following on 29 minutes later the North Tower fell causing clouds of smoke and covering Lower Manhattan with debris. 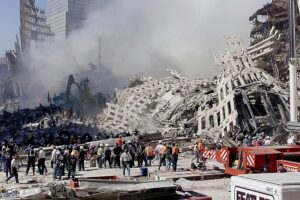 Rescue operations began immediately as the country and the world came together and commemorated the lives lost to this tragedy. Nearly 3,000 people had perished: 2,750 people in New York, 184 at the Pentagon, and 40 in Pennsylvania. Included in the total in New York City were more than 400 police officers and firefighters, who had lost their lives after rushing to the scene and into the towers. Not only was this event so tragic and sudden, but it also still touches the hearts across the whole world. Here today, we commemorate 20 years since 11th September 2001.

The emotional distress caused by the attacks; particularly the collapse of the twin towers, New York City’s most visible landmark was extremely overwhelming. Unlike the relatively isolated site of the Pearl Harbor attack of 1941, to which the September 11 events were soon compared, the World Trade Center lay at the heart of one of the world’s largest cities.
Hundreds of thousands of people witnessed the attacks first-hand and millions watched the tragedy unfold live on television. In the days that followed September 11, the footage of the attacks was replayed in the media countless times, as were the scenes of throngs of people, stricken with grief, gathering at “Ground Zero”—as the site where the towers once stood came to be commonly known, many with photos of missing loved ones, seeking some hint of their fate and hope that they were alive.

After the attacks of September 11, countries allied with the United States rallied to its support, and collectively felt the true loss caused by these attacks. Evidence gathered by the United States soon convinced most governments that the Islamic militant group Al-Qaeda was responsible for the attacks. The group had been implicated in previous terrorist strikes against Americans, and Bin Laden had made numerous anti-American statements. 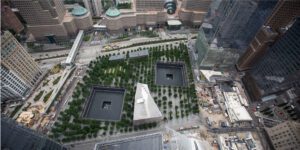 For the first time in its history, the North Atlantic Treaty Organization (NATO) invoked Article 5, allowing its members to respond collectively in self-defence, and on October 7th the U.S. and allied military forces launched an attack against Afghanistan. Within months thousands of militants were killed or captured, and Taliban and al-Qaeda leaders were driven into hiding. In addition, the U.S. government exerted great effort to track down other al-Qaeda agents throughout the world and made combating terrorism the focus of U.S. foreign policy. As a result of this, the security measures in America were tighten severely and the Department of Homeland Security was also established to prevent future terrorist attacks.
Here at Eden Camp Modern History Museum, we aim to present, preserve, and tell personal stories. We are therefore aiming to extend our Post-War conflict hut in addition to adding further post war conflicts and events which have changed the world across the 21st Century.