2>For today’s Forgotten Friday we are delving into history of the First World War!

107 years ago (yesterday!) was the Scarborough Bombardment of 16th December 1914! 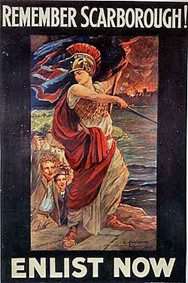 The raid on 16th December 1914 was an attack by the Imperial German Navy on the British ports of Scarborough, Hartlepool, West Hartlepool and Whitby. The unexpected bombardments caused hundreds of civilian casualties and resulted in public outrage in Britain against the German Navy for the raid and the Royal Navy for failing to prevent it. 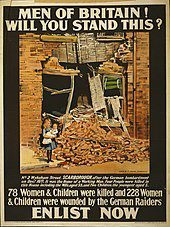 Admiral Hipper left the Jade Bight at 03:00 on 15th December. During the following night, SMS S33, one of the escorting destroyers, became separated and broke wireless silence to ask for direction. This risked giving away the presence of the ships and the destroyer was ordered to be silent. Still lost, it headed for home but on the way, sighted four British destroyers which it reported by wireless.

Hipper also noted radio traffic from British ships which caused concern that the British might be aware something was up. He attributed this to possible spying by trawlers which were encountered during the day. The deteriorating weather was also causing problems. At 06:35 on 16th December, the destroyers and three light cruisers were ordered to return to Germany. Kolberg, one of the destroyers, remained, as she had 100 mines to lay.

The remaining ships divided; Seydlitz, Blücher and Moltke proceeded towards Hartlepool, while Derfflinger, Von der Tann and Kolberg approached Scarborough. At 08:15, Kolberg began to lay mines off Flamborough Head in a line extending 10 miles (8.7 nmi) out to sea.

At 08:00, Derfflinger and Von der Tann began to bombard the town… 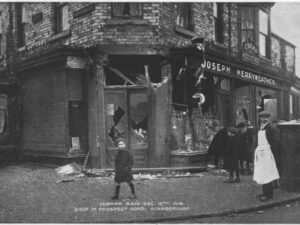 Damage to the Merryweathers’ shop. Emily Merryweather was killed while trying to usher people to safety in their cellar.

In Scarborough alone, 18 people died and buildings including Scarborough Castle and the Grand Hotel were hit. One victim was a baby boy, another a shoemaker who died from wounds ten days later. Most victims were younger adults aged 20-45, and the oldest was a 65-year-old man. Two nine-year-old boys died. A 15-year-old became the only Boy Scout to die during World War One. Three housemaids, a postman and an architect were killed, and a store owner who was ushering others to safety in her cellar. 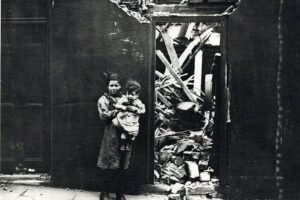 The infamous No.2 Wykeham Street well known for its fame as the ‘propaganda house’, the Bennett family had been getting ready for the day.

In an account to the Scarborough Mercury, 25-year-old Christopher Bennett said: “Father and mother and the two children were downstairs in the kitchen, and father had called out to me: “Come on lad. Let’s away downstairs. It’s the Germans. Come and look after mother.”
“But, before I had time to get downstairs it had all happened.”
“It was a long time before I realised anything or where I was. I was practically buried in stuff.”
“When at last I could look around me I had only a shirt and one slipper on.”

Christopher and his father survived but his brother Albert, mother Johanna and two boys, George Barnes, 5, and John Ward, 10, had to be dug out of the rubble. All died soon afterwards. 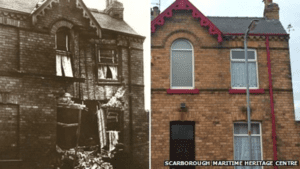 During the raid people panicked, and tried to flee Scarborough by road and rail during the half-hour attack by vessels, Derfflinger and Von der Tann. Many thought that it was the first salvo ahead of an invasion of the coastline. The railway station became a first aid post.
The Coastguard station on the cliff edge was destroyed, and the 18th-century castle barracks damaged beyond repair. The medieval curtain wall was hit by several shells. The keep, built in the 12th century, withstood the bombardment, although scars on its brickwork can still be seen today.

The incident had a huge impact on national morale – the Germans were demonised as ‘baby killers’ for deliberately targeting civilians hundreds of miles from the battlefields. Recruitment experienced a boost from men determined to avenge the North Sea attacks. 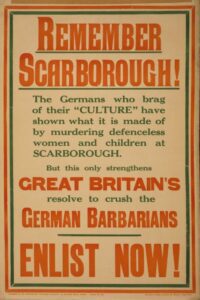