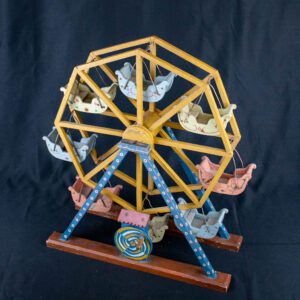 This Ferris Wheel was made by a POW based in a camp in Canada. It was recently donated to Eden Camp after being found under floorboards in Banard Castle.

Eden Camp was first built to accommodate Italian POWs captured in Northern Africa. It consisted of about 45 huts, split into two compounds, the larger holding the POWs and the smaller the accommodation, offices and ancillary buildings for British guards and military personnel.

The first prisoners built the camp, and were put to work on local farms and other industries to keep them occupied – although this only kept them busy for the working day. They spent their leisure time here at Eden Camp being creative with activities such as wood carving, listening to the radio or playing cards. Some dug small ponds and built castles and light houses in their centres which became a feature of the campgrounds (see photos). 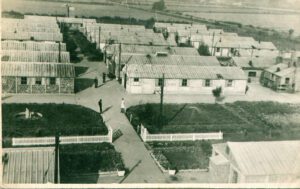 Eden Camp in the past.

Art, in the form of painting, carving and sculpting, was also undertaken by the prisoners, revealing hidden or known talents. Frequently, the raw materials for hand crafts were found in the camp, but wood, metal, artificial wool, modelling clay, canvas, guitar strings and many other things had to come from the outside. 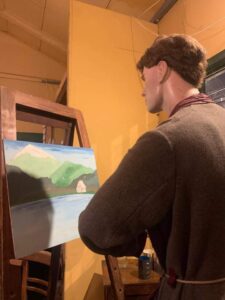 POW painting scenery in Hut 10 at the museum.

Woodcarving, metalwork, leatherwork, the writing of plays and pamphlets were only some of the activities undertaken to pass the time. Some of the specialist workers like tinsmiths, goldsmiths, artists and watch-repairers produced high quality work while more ordinary products included clothes brushes made from horse hair collected on the farms and sandals and slippers of rope. 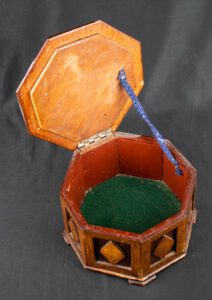 This Box was made Albert Schmitz, a German POW based at East Witton, North Yorkshire, with materials and tools found on the farm he worked on.

As time went by, the prisoners asked, and were granted permission, to convert the interior of one of the huts into a chapel and to construct a stage in the recreation hut. Here plays were performed and the prisoner’s orchestra played to appreciative audiences made up not only of their fellow prisoners but also the British officers, their wives and invited locals. They even made some of their own instruments. In fact it is apparent that men possessing a wide variety of skills spent time at Eden Camp and contributed to its life. 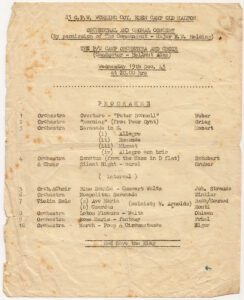 A concert program from Eden Camp from 1945.

When repatriation was introduced in 1947 not all the POWs went home. Some married local girls and were allowed to stay, whilst others who had found permanent work with farmers were also allowed to remain. Some prisoners, upon returning to Germany, even deciding that they had left a better way of life in Britain and so volunteered to return to this country as part of an organised labour force.

Here at Eden Camp there are many items which have been hand crafted by Prisoners inside Hut 10 in the museum – you can also learn more by visiting our Digital Archive here.