For today’s #ForgottenFriday, with it being #National Smile Day, we thought we would explore the ways the British public boosted morale during the hardship of WW2.

Britain re-created the First World War ‘Ministry of Information’ for the duration of the Second World War to generate propaganda to boost morale and public support for the war effort.

A wide range of media was employed aimed at local and overseas audiences. Traditional forms such as newspapers and posters were joined by new media including cinema, newsreels and radio. A wide range of themes were addressed, fostering hostility to the enemy, support for allies, and specific pro-war projects such as conserving metal and growing vegetables famously known as ‘Dig For Victory’.

Here are some of the examples below:

The infamous cartoons created by Punch and political cartoonists, were not only significant to its time creating laughs and smiles across the country, but it also to this day, is extremely important in wartime memorabilia and newspapers. Cartoons produced during WW2 by both Allied and Axis powers commented upon the events, personalities, and politics of the war. Governments used these cartoons for propaganda and public information. 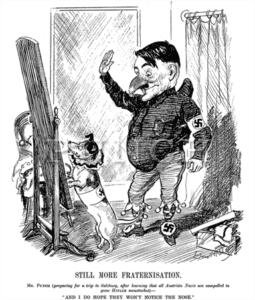 “Still More Fraternisation” cartoon from Punch Magazine, 1935. Caption: Mr Punch (preparing for a trip to Salzburg, after learning that all Austrian Nazis are compelled to grow Hitler moustaches) – “And I do hope they won’t notice the nose.” 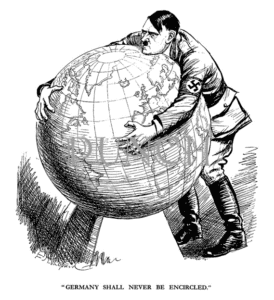 Pictured: “Germany Shall Never be Encircled” cartoon from “Punch or The London Charivari” April 12, 1939, by E.H. Shepard.

All forms of the media – radio, newspapers, magazines, cinema films and newsreels – were censored and controlled by the Ministry of Information.
Radio and cinema were used to ensure morale did not drop, as well as informing people of the successes created by the Allies. The Government controlled, or censored, the information which was broadcast on the radio to maintain the people’s war spirit. However, because the BBC ‘self-censored’, it rarely needed to interfere.
Radio broadcasts spoke of the key successes such as the Battle of Britain to spread positive messages, and they preached about the bravery and determination of people during the Blitz.
Enemy successes, such as the fall of Singapore or the Nazi takeover of France, were not promoted as much.
The BBC was an important part of maintaining morale as it was heard in the home via the radio, or wireless. A popular radio broadcast was ‘It’s That Man Again’. It was a comedy that made fun of both the enemy, and British methods of coping with the war. A very similar way of boosting morale akin to the cartoons. 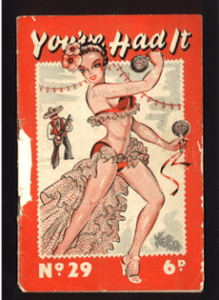 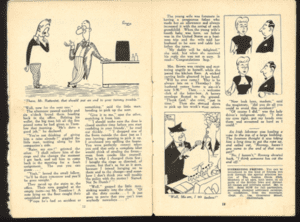 The Government used the cinema to help promote the war effort, raise people’s spirits and share victories.
People were shown newsreels before the main feature film which informed them about the events of the war. The film industry produced pro-British and pro-war films. The most popular and powerful films about the war were Went the Day Well?, The Day Will Dawn in 1942, and Tomorrow We Live in 1943. Went the Day Well? featured an English village captured by German paratroopers, where the local Home Guard and villagers work together to defeat the invaders. 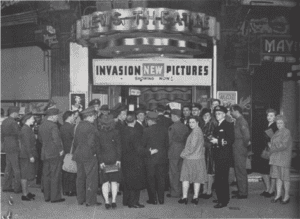 There were two major appeals during the war to show how propaganda could be used to help Britain cope:

Dig for Victory
The Ministry of Food wanted people to waste less food and to grow their own. This would also help them cope with rationing. This campaign urged people to use any spare land to grow vegetables. Parks, golf clubs and, more notably, the moat at the Tower of London were used. People were asked to turn their flowerbeds into allotments. Recipes were also given out suggesting new ways to cook vegetables, including ‘curried carrot’ and ‘carotade’.
By 1943, there were 3.5 million allotments in Britain and over a million tonnes of vegetables were produced. 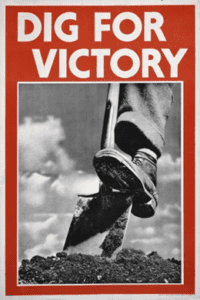 Appeals were created to encourage people to give money towards the production of the exciting and popular Spitfire planes. Local newspapers listed the people and groups who had donated. In fact, almost every big British town had their names on Spitfires to show how they had generously donated. This would have made people feel they were part of the war effort, and the images of the fundraising events were cleverly used as propaganda. 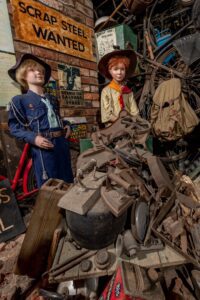 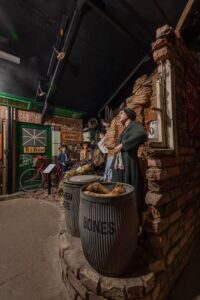 Churchill:
An aspirational and inspirational war hero who embodied the bulldog spirit; Churchill had criticised appeasement during the late 1930s and was determined to stop Hitler. There was no talk of surrender. He delivered strong speeches and visited areas that had been bombed by the Germans in the hope of raising morale. People could listen to his speeches on the radio, which instantly boosted morale!

“Victory. Victory at all costs — Victory in spite of all terror — Victory, however long and hard the road may be, for without victory there is no survival.”