For today’s #ForgottenFriday, we are commemorating the 5th November by looking into explosives!

When dropped on built-up areas such as towns and cities, the incendiary bomb proved to be one of the most effective weapons used by the German Air Force, or Luftwaffe, during the Second World War.
Between September 1940 and May 1941, the Luftwaffe caused serious damage by dropping large quantities of incendiary bombs on British towns and cities, either by means of containers that were carried on bomb racks and released to open at a predetermined point, or from very large containers, holding up to 700 bombs, that remained on the aircraft. 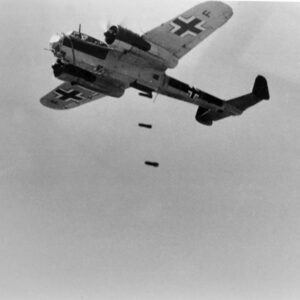 To defeat the efforts of the fire services, a small explosive charge was sometimes used in the tail or nose of the 1kg bomb, that was either ignited by the heat itself, or by means of a delayed action device causing small but effective fires across Britain.

Here at Eden Camp, we have many areas of display which show some of the issues which were caused by the incendiary bombs during the Second World War. For example, in Hut 4: Britain Prepares, the ARP wardens are effectively removing an exploded incendiary bomb in a living room, using the well known published methods across Britain. 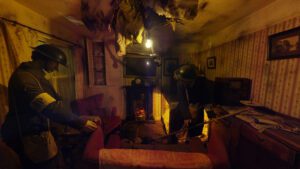 Precautions Against Incendiary Bombs, the ABC of ARP! 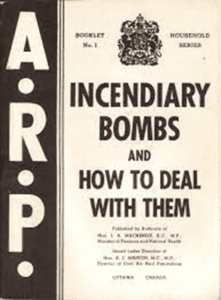 There are many precautions that can be taken, this includes the following:

• Clearing Loft, Attic, etc., of all material of an inflammable nature, such as paper and lumber.
• Protecting the floor of the loft or attic:
– Before deciding on the material to be used it will be necessary to ascertain what weight the floor will bear. Various materials can be used. In addition to this it is possible to use
corrugated or sheet iron.
– Woodwork in the loft or attic should be lime washed with a mixture of 2lb of slaked lime, 1oz of salt and 1 pint of cold water. Two coats of this should be applied. These measures
must be taken in advance.

How to deal with an Incendiary Bomb:

1. To make the bomb burn out quickly and prevent the spreading of fire, water must not be thrown, only sprayed, on the device. 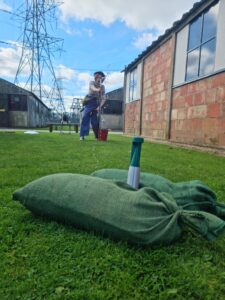 2. If the bomb has fallen in an accessible place, it can be extinguished by smothering with dry sand or earth. If earth is used, be certain it is free from roots, twigs, leaves etc. the
sand is placed on the bomb by using the scoop and rake combined to form a long handle. 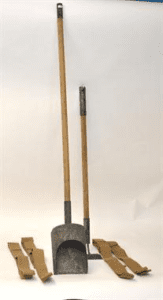 3. When sufficient sand has been placed on the bomb, the rake is separated from the scoop and is used to pull the bomb and sand into the scoop, where it should then be placed in the sand-
container or a bucket.