This #ForgottenFriday we’re showing off some fantastic new donations about Eric Bucktin!

This week we received a selection of artefacts relating to Mr Eric Bucktin, and his time as a Prisoner of War in WW2. 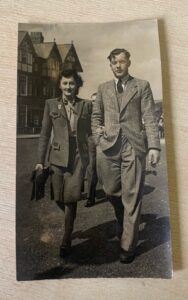 Eric joined the Territorial Army in 1938 and, together with several other young men from Scarborough, he served with the fifth battalion of the Green Howards (Just like our museum’s founder, Stan Johnson!). At 16, he was one of the youngest members of the British Expeditionary Force, following the German invasion of Holland and Belgium.

He helped fight a rear-guard action at Dunkirk in 1940 and was one of the last British Soldiers to be evacuated. He fought at El Alamein and Tobruk before he was captured in June 1942 and taken to a prisoner of war camp in Italy and later eastern Germany.

In the wake of the Russian Advance on Germany, Mr Bucktin was made to join a forced march along with other Scarborough men. With a fellow soldier from Hull, he escaped when he swapped a pistol given to him by a British officer, for a motorbike from a local farmer. 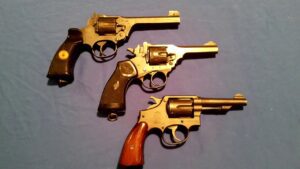 The pair then travelled on the bike to Prague and were hidden in the cellars of the university until they were able to link up with the US Army and return home.
Mr Bucktin was born in Flixton and went to Gladstone Road School. For many years his family ran a dairy business in Princess Street, Scarborough. After the war he moved to York where his wife Yvonne’s family lived. He worked as a bricklayer in Pocklington before he set up his own building business which he ran until he retired in 1988. 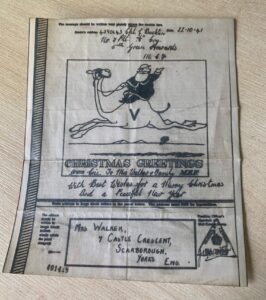 Along with his story, we also received a Christmas Card containing a poem and original air mail too! 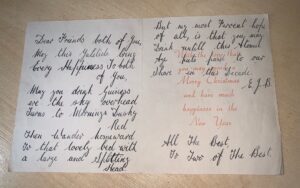 Dear Friends, both of you
May this Yuletide bring
Every Happiness to both of you
May you drink Guinness
ere the sky overhead Turns to Morning’s Dusky Red
Then wander homeward
to that lovely bed with
a large and splitting head.

But my most fervent hope of all
is that you may drink until
this atomic age puts paid
to our share in this Decade.