On today’s #ForgottenFriday we are focusing on Dogs in WW2 after inspiration from our ARP warden Gav, and Indie the rescue dog!

Throughout history animals have accompanied men into combat as modes of transport and communication, protectors, and companions. They have fulfilled a variety of roles – from carrying men and munitions to evacuating the wounded, performing guard and sentry duties to carrying out search and rescue operations, detecting gas in trenches to locating improvised explosive devices (IEDs) in Afghanistan. 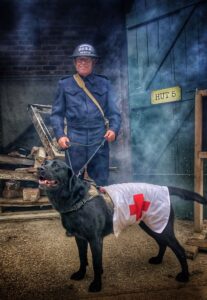 SEARCH AND RESCUE
Dogs, with their keen sense of smell, could seek out soldiers and civilians in distress or in need of assistance. During the First World War, search and rescue dogs would venture out into no man’s land to locate wounded men. They carried water and medical supplies to men out of the reach of ambulances and could lead stretcher parties to wounded soldiers stranded in no man’s land. 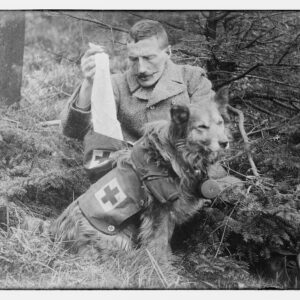 A search and rescue dog in WW1 being re-stocked.

Dogs also performed search and rescue duties on the home front during the Second World War, helping to locate people trapped under debris following German air raids. An example of one of these extraordinary dogs is Rip: Rip was a stray dog adopted by the Poplar ARP (Air Raid Precautions) in east London during the Second World War. During the Blitz, he helped locate people and animals buried in the debris after an air raid. In this photograph, taken on 5 August 1941, Rip searches the rubble for survivors after an air raid in Poplar, East London. 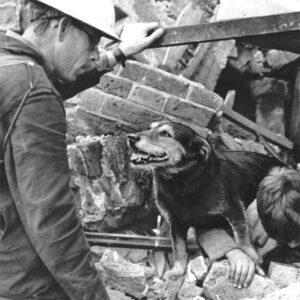 GUARD DOGS AND SCOUTS
Dogs, with their sensitive hearing and heightened sense of smell, are particularly suited for detection duties. Guard dogs are employed to watch over militarily important locations – such as railways, bridges, defence installations and ammunition stores – and give warning of any trespassers. Scouting dogs similarly alert their handlers to the presence of enemy troops, but this must be done silently so as not to give away a patrol’s position. 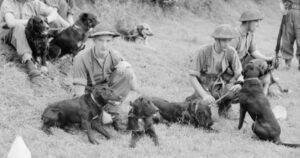 Mine dogs on the front line.

PEST CONTROL
Conditions in the trenches could lead to infestations of disease-spreading pests, particularly rats attracted by food, waste and dead bodies. Cats and dogs were sometimes trained to hunt these vermin and help maintain hygiene in the trenches. This is the pet dog of the Middlesex Regiment, pictured with its catch of rats in a trench on the Western Front during the First World War. Cats were also kept on board Royal Navy and merchant ships to hunt vermin and protect the food stores from rats – a role they have played throughout history. 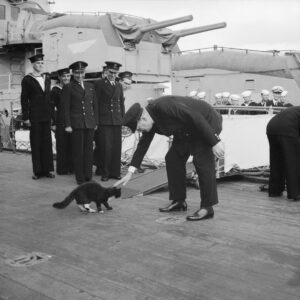 Winston Churchill stops ‘Blackie’, ship’s cat of HMS PRINCE OF WALES, crossing over to a US destroyer during the Atlantic Conference, August 1941.

D-DAY
On June 6, three dogs fitted with parachutes, originally designed to drop bicycles, which opened by a static line as the dog exited the aircraft leapt from an Albemarle bomber over France under heavy anti-aircraft fire. 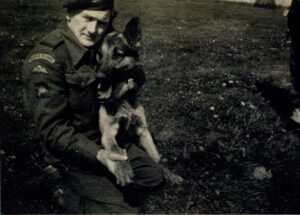