Today it is hard to imagine, with the conspicuous consumption and commercialisation of a modern Christmas, how families coped during the Second World War. However, despite all these challenges, many families managed to put together a very successful festive celebration. 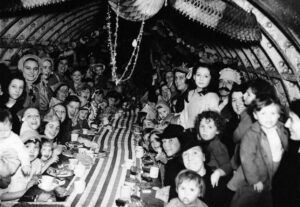 For many families, the most difficult part of a wartime Christmas would be spending the festive season apart from loved ones. Many men were fighting abroad in the armed forces or were being held as prisoners of war. Women might also be away in the services or carrying out war work. Many children spent Christmas away from home as evacuees. By the end of the war, thousands of families had suffered the death of a family member either in action or from enemy bombing raids.

Christmas luxuries were especially hard to come by at a time when even basic foods were scarce. People were forced to find substitutes for key festive ingredients. Gifts were often homemade and practical, and children’s toys were often made from recycled materials. Cards were smaller and printed on flimsy paper. 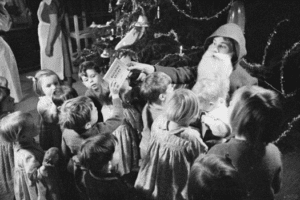 In 1941, to conserve paper, the Ministry of Supply decreed that ‘no retailer shall provide any paper for the packing or wrapping of goods excepting food stuffs or articles which the shopkeeper has agreed to deliver’. This made it difficult to keep Christmas presents a surprise. 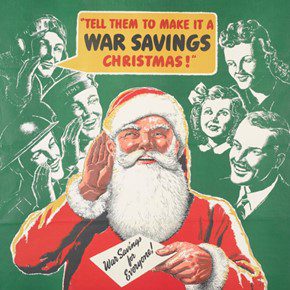 This poster was issued by the National Savings Committee, which encouraged saving, discouraged frivolous spending and promoted public investment in the British war effort.
As in peacetime, singing songs and carols were rituals of wartime Christmases, along with the performance of pantomimes and festive plays. The BBC also broadcast a special Christmas Day radio programme. From 1939 onwards this featured a Christmas speech by King George VI, and became so popular with listeners that it became an annual ritual. 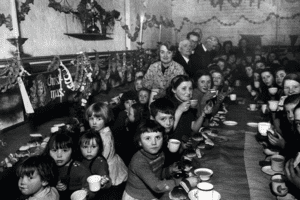 Although the blackout meant there were no Christmas lights in the streets, homes were still enthusiastically decorated for the festive season. Cut-up strips of old newspaper made very effective paper chains, holly and other garden greenery adored the pictures on the walls, and pre-war decorations and glass baubles decorated make-do Christmas trees. The Ministry of Food had tips for making these simple decorations even more festive:
‘A Christmassy sparkle is easy to add to sprigs of holly or evergreen for use on puddings. Dip your greenery in a strong solution of Epsom salts. When dry it will be beautifully frosted.’
Presents were often homemade and as wrapping paper was scarce, gifts were wrapped in brown paper, newspaper, or even small pieces of cloth. Scarves, hats and gloves might be hand knitted using wool unravelled from old jumpers that had been outgrown by members of the household. War bonds were bought and given as gifts, thereby also helping the war effort. Homemade chutneys and jams made welcome presents. Practical gifts were also popular, particularly those associated with gardening, for example homemade wooden dibbers for planting. Apparently the most popular Christmas present in 1940 was soap!