We’re looking into the importance of beer this week for #ForgottenFriday, and the impact it had on society’s morale throughout WW2!

One of the less-studied aspects of the Second World War is the production and consumption of alcohol during the war.

Unlike the preceding “Great War’ (WWI), little is written on the overall role of alcohol during this period. This is unfortunate because the little documentation that does exist shows alcohol as a colourful microcosm of the conflict itself. In some theatres, the role of alcohol mirrored the wider struggle playing out; in others it lent insight into the psychology of a society’s war effort. Of course, in a state of total war, a study of any industry would provide similar insights, but alcohol is special for carrying national or regional character.

Steel is steel; rubber is rubber; and oil is oil. But alcohol is wine; alcohol is vodka; alcohol is whisky and rum. While industry is concerned with materiel, alcohol is concerned with people.
Therefore, during the Second World War, the Government regarded beer as essential for maintaining morale and sustaining the war effort. Supplying beer to the troops was regarded as an essential part of the rest and recuperation, which for breweries meant that production rose. As shelf-life and conservation were very different at this time. Beer from home could find its way to a soldier in the Pacific Ocean, but it certainly didn’t taste like home.
Any attempts to import beer to the troops produced poor results. Furthermore, the beer industry was undeveloped in Asia and unable to meet the British soldiers’ needs. Therefore, the Menestheus was fully kitted out to be a floating brewery ready to make house calls across the Pacific. 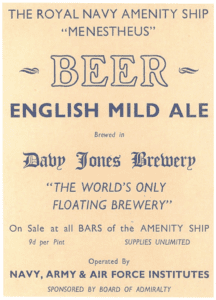 George Brown from the famous Truman’s Brewery (active from the 17th century until its close in the 1980s) of London was made head brewer. He produced the ship’s first batch of beer on New Year’s Eve 1945. Needing only eight days to ferment and settle, the second batch was on the go by January 7th, 1946. Though the ship wasn’t fitted out to be working while in motion, when it was stationary, the HMS Menestheus was able to pump out 250 British-sized barrels per week.
Using the heat that came from the ship’s boilers themselves, distilled seawater, and malt extract, Brown further defied the odds of brewing in such an unusual location by using a closed-fermentation system which was developed to make up for the lack of a mash tun. 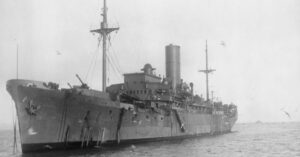 Alongside the use of floating breweries there was also the use of aircraft in the shipment of beer to troops in the Second World War.
In the early days after the Normandy invasion of June 1944, British and American troops noticed an acute shortage of alcoholic drinks — namely beer. Many British soldiers complained about watery cider being the only drink available in recently liberated French towns. Luckily for them, the Royal Air Force was on the tap to solve the problem.
With no room for cargo on their small fighter planes, RAF pilots arrived at a novel solution – using drop tanks to transport suds instead of fuel. The drop tanks of a Spitfire each carried 45 gallons of gas, meaning a plane could transport 90 gallons of extra liquid. When carrying fuel, the tanks were used and then discarded. For the purposes of ferrying beer, ground crews set about steam cleaning the tanks for their special deliveries. These flights became known as “flying pubs” by the troops they served. A few British breweries, such as Heneger and Constable, donated free beer for the RAF to take to the front. Other units had to pool their funds and buy the beer. 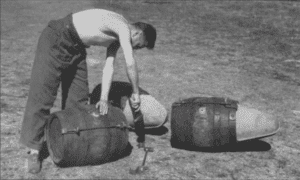 The drop tanks also had a serious disadvantage. While they could carry large amounts of beer, the initial runs still tasted of fuel. Even after the tanks had been used several times and lost their fuel taste, they still imparted a metallic flavour to the beer. These kegs, often called ‘beer bombs,’ were standard wooden kegs with a specially designed nose cone and attachments for transport under the wing of the Spitfire. Though they carried less beer, it arrived tasting like it just came out of the tap at the pub, chilled by the altitude of the flight over the channel!
To ensure their compatriots remained satisfied, pilots would often return to England for rudimentary maintenance issues or other administrative needs to grab another round. As the need for beer increased, all replacement Spitfires and Typhoons being shipped to airfields in France carried ‘beer bombs’ in their bomb racks to the joy of the thirsty crews manning the airfields. 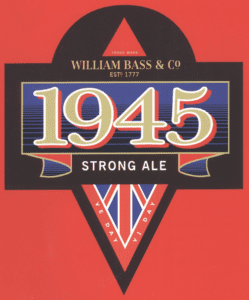 With Bass 1945 Strong Ale, Bass donated for every bottle sold 20p to the ‘Tribute & Promise’ appeal for distribution to over 100 veteran and wartime generation charities.

The Official Beer of Her Majesty’s Government to commemorate the 50th anniversaries of VE & VJ Day:
Bass 1945 Strong Ale was brewed to a traditional pale ale recipe using 1940s yeast. It was a 5.1% ABV beer, brewed and packed at Cape Hill, Birmingham. A 3.6% ABV cask version was also available.
The momentous event of VE Day was also celebrated by nine other breweries – special beers included Joules Victory Ale (1946) and the Tadcaster Tower Brewery’s Victory Ale, produced in 1945 to celebrate the first Christmas of peace since 1938.