While the War Office kept fathers fighting on the front line, the Ministry of Supply kept women hard at work in the factories. But Ministry of Health helped the nation’s mothers maintain another form of essential production!

In the middle of one of the biggest wars in history, with food shortages, bomb damage, and an uncertain future, it may seem a strange time to bring a child into the world. Yet in 1939-1945, over 5.3 million babies were born in Britain. By the end of the conflict there had even been a baby boom!

The war’s start was the worst time to have a baby. Many hospital wards were evacuated for the expected mass air raid casualties, so pregnant women in towns and cities, were pressured to consider evacuation. In 1939, of the 1.5 million evacuees were sent to the countryside, 13,000 were expectant mothers. The small country hospitals could not cope with the influx so emergency evacuation maternity homes were opened in the fine surroundings of stately homes or converted grand hotels.
For those that chose not to leave for the country, it was also not unusual for babies to be born in air raid shelters; in fact it was so commonplace that the ARP Wardens were instructed on how to delivery a baby. 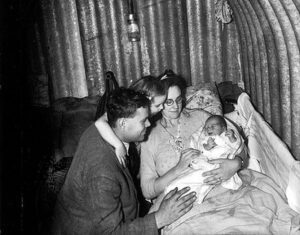 From June 1940 the National Milk Scheme made subsidized or free milk available to all pregnant women or nursing mothers. In 1942, the Vitamin Welfare Scheme was extended to allow expectant and nursing mothers, plus children under five, free or cheaper bottled orange juice, cod liver oil, or vitamin A or D Tablets.

Many children vividly remember the ‘dreaded’ cod liver oil and its distinctive taste.

The Government was good to children in World War Two despite the severity of rationing. Children had their own ration books which were more generous than those of adults. Pre-school children had allowances specifically for cod-liver oil and orange juice.

One account of childhood memories:
“The orange juice tasted wonderful, but the cod-liver oil was absolutely disgusting. I wouldn’t have any of it; so, my mother, with the ignorance of her background, just gave me extra orange juice ‘to make up’.”

The common opinion that “cod-liver oil was absolutely disgusting”, and the refusal to take it was so widespread, it soon became available as ‘cod liver oil and malt’, a totally acceptable brown sticky substance that tasted like ‘toffee and had to be spooned out of a large jar.’ 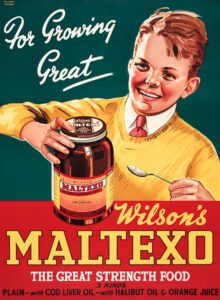 Mothers who were expecting were issued with a special green ration book – and it sometimes allowed them to jump the queue outside the shops. The Ministry of Food became the mother’s ‘ally’ advising them to use products such as Cod Liver Oil and Concentrated Orange Juice as it gives ‘vitality and good health’.

It clearly worked, as the supplement has evolved to the tablets and capsules we are familiar with today!