This #ForgottenFriday coincides with Friday 13th – unlucky for some!

Today we are reminiscing on the events of Friday 13th during World War Two. Friday 13th is a day that shivers down many people’s spines and is well known for its chaos and change in luck. Even to the Royal Family and nevermore so than during the Second World War on Friday 13th September 1940…

The summer of 1940 had seen the German Army ramp up their violent attacks on British soil, and London was enduring chaos by the Luftwaffe. Most of London’s infrastructure was destroyed by the German Blitz attacks which hounded civilians of Britain, destroying their homes, and killing loved ones.
As a large target for the German Luftwaffe, there were early signs that the Palace and royal family were under threat. On 8th September a 50kg bomb fell on the grounds of the Palace, but luckily did not explode and was later exploded in a controlled explosion far away from London. 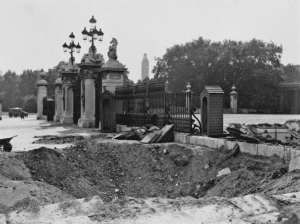 September 1940: A crater and damaged railings outside Buckingham Palace, London, after the explosion of a German bomb dropped in an air raid the previous day.
(Photo by Central Press/Hulton Archive/Getty Images)

On the morning of the 13th, King George VI and Queen Elizabeth heard a rumble and a crash. A German raider had dropped five explosive bombs on the Palace. The Royal chapel, inner quadrangle, Palace gates, and the Victoria memorial were all hit by the bombs. Four members of the Palace staff were injured, one of whom sadly died.
In a letter, Queen Elizabeth described how she heard the ‘unmistakable whirr-whirr of a German plane’ and the ‘scream of a bomb’. Thankfully, the King and Queen went unharmed in the incident.

In a poignant statement, Queen Elizabeth also said “I am glad we have been bombed. It makes me feel I can look the East-End in the face.” 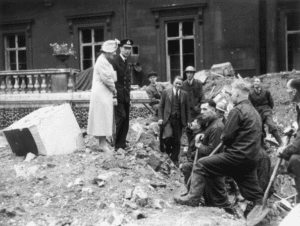 Whilst, of course, King George and Queen Elizabeth were shaken by the bombing, the incident would go on to bolster the reputation of the Royal Family in the eye of the British public. The King and Queen were advised by the Foreign Office to immediately flee the country. Their refusal showed commitment to the United Kingdom that the public appreciated. 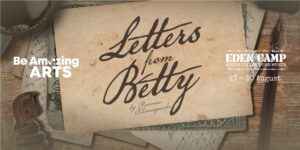 It was not the only significant Friday the 13th either!

After delving further into the mountain of love letters from our wartime sweethearts, Bert and Betty, our Archivist Summer came across one of Bert’s wartime diaries from 1942. On Friday 13th March 1942, it was noticed that he received his Royal Navy Service papers and his time at war was about to begin!

Experience first-hand how Bert and Betty navigated their relationship through the war with a love story like no other over this August Bank Holiday in a multi media promenade performance – click here to book your tickets now!