Today is the 77th anniversary of D-Day

Read a first hand account of the trepidation surrounding the turning point of WW2.

On June 6th, 1944, the Allies attacked German forces on the coast of Normandy, with over 156,000 Allied forces landing on five beaches along a 50-mile stretch of the coast of France’s Normandy region. 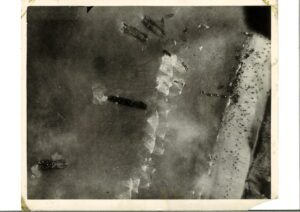 Pictured: This photograph shows a stretch of the beachhead during D-Day on 6th June 1944.

The invasion was one of the largest amphibious military assaults in history and required extensive planning. Prior to D-Day (Operation Overlord), the Allies conducted a large-scale deception campaign designed to mislead the Germans about the intended invasion target. By late August 1944, majority of northern France had been liberated, and by the following spring the Allies had defeated the Germans. 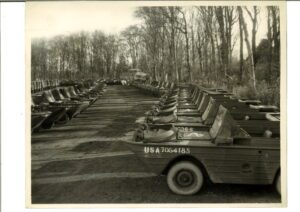 Pictured: Amphibious jeeps being stored in preparation for D-Day. 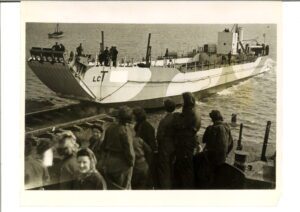 Pictured: A landing craft launches as the women who built it watch on, April 1944.

By dawn on June 6, thousands of paratroopers and glider troops were already on the ground behind enemy lines, securing bridges and exit roads. The amphibious invasions began at 6:30 a.m. The British and Canadians overcame light opposition to capture beaches code-named Gold, Juno and Sword, as did the Americans at Utah Beach. By day’s end, approximately 156,000 Allied troops had successfully stormed Normandy’s beaches. 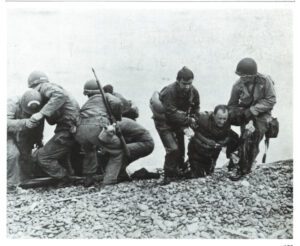 Pictured: After their landing craft was sunk, survivors struggle to shore at Utah beach.

According to some estimates, more than 4,000 Allied troops lost their lives in the D-Day invasion, with thousands more who were wounded or missing.
The D-Day invasion is significant in history for the role it played in World War Two. It marked the turn of the tide for the control maintained by Nazi Germany, less than a year after the invasion, the Allies formally accepted Nazi Germany’s surrender in 1945.

It was a day that cost many lives on all sides of the conflict, changing not only the future of countries, but of families as well. Because of that, there is much to be learned from those who experienced its victories and its horrors first-hand.
Here below – we have an example of the worry of Betty’s Husband Bert not coming home after D-Day. Although strenuous, Betty receives a letter from Bert written on 8th June 1944 on 10th June 1944. Imagine how it must feel not knowing whether a loved one is alive or dead? 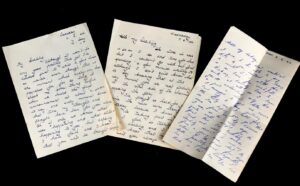 Bert describes in little detail (due to censorship) that:

‘I am as the card says, quite well, except for the fact I am terribly tired and weary – sounds deadly doesn’t it coming from a young man. The strain of the last four days both mentally and physically has been pretty heavy… I’ve gone through quite a sticky time at the moment, the whole time I was thinking of you and the future – and somehow, I felt that nothing could go wrong to interfere with us, so don’t worry my dear.’

Here at Eden Camp we bring the personal stories of those within the war to life! You can experience Bert & Betty’s lives throughout the war in our new promenade performance in partnership with BeAmazingArts!
Check out ‘Letters from Betty’ on website here!

← #ForgottenFriday – Ode to our Volunteers!
Nominate us for the Family Friendly Museum Award! →