Stokesley’s ‘Classics on Show’ Gets WWII Flavour With Eden Camp!

Stokesley’s ‘Classics on Show’ Gets WWII Flavour With Eden Camp

This year’s ‘Classics on Show’ event set to run at the Showfield, Stokesley on Saturday, August 7 will have a definite WWII feel with the arrival to the show line up of Eden Camp, the modern history museum near Malton.

Eden Camp is planning to exhibit two of its popular 1943 exhibits from its extensive WWII-related vehicle collection at the show, including a Triumph 3HW motorbike, and a SAS Jeep ‘Billy Boy.’ 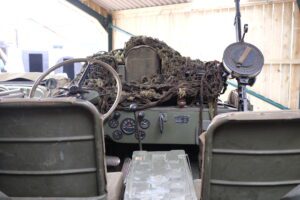 “These are really welcome additions to ‘Classics on Show’ with both vehicles having played key roles in the last world conflict,” said Chris Mayes of Stokesley Rotary Club which organises the event.

“The Triumph 3HW was popular with dispatch riders during WWII and though it was used by men, being lighter than the 550 it was ideal for women with the ATS, WREN and WRAF while ‘Billy Boy’. is a rare piece of military history being part of the USA’s Lend Lease Agreement, given over to the British forces circa 1943/44, and adapted to suit airborne use and serving in the British Army until 1950.”

Pictured: Triumph 3HW in the sunset

Eden Camp experts will be on hand at Classics on Show’ to answer all questions about the vehicles. They will also run a competition testing visitors’ knowledge with the winner going home with a family ticket for a day out at the museum, where they can experience the sights, sounds and smells of life on the Home Front and the Front Line, all set in the buildings and grounds of an original World War 2 Prisoner of War Camp.

“We are excited about being part of the ‘Classics on Show’ line-up and giving visitors a taste of some of the vehicles we have on show at Eden Camp,” commented Harriet Stainton, Marketing Manager of the museum. “Classics on Show, like Eden Camp, is a great way of keeping history alive and of celebrating it in an entertaining and fun day out.”

Classics on Show 2021 is set for an exciting return showing after having missed its annual outing last year. This year’s event, which for the first time will feature a dedicate motorbike arena, has already attracted the support of the Yorkshire Coast British Motorcycle Club which is planning to exhibit up to a dozen bikes.

Classics on Show 2021 is sponsored by Mathewson’s classic vehicle auctions of Thornton-le-Dale, SG Petch, the family run multi franchised car dealership, and Lexus Teesside. The show is free to enter for exhibitors, though donations are welcomed. Visitors pay £6 or £14 for a family ticket while auto jumble traders pay £15 for a standard pitch. The event regularly attracts up to 400 exhibitors. Funds raised from this year’s show will go to local and Rotary charities.