#Forgotten Friday: The Bear Soldier of the Second World War 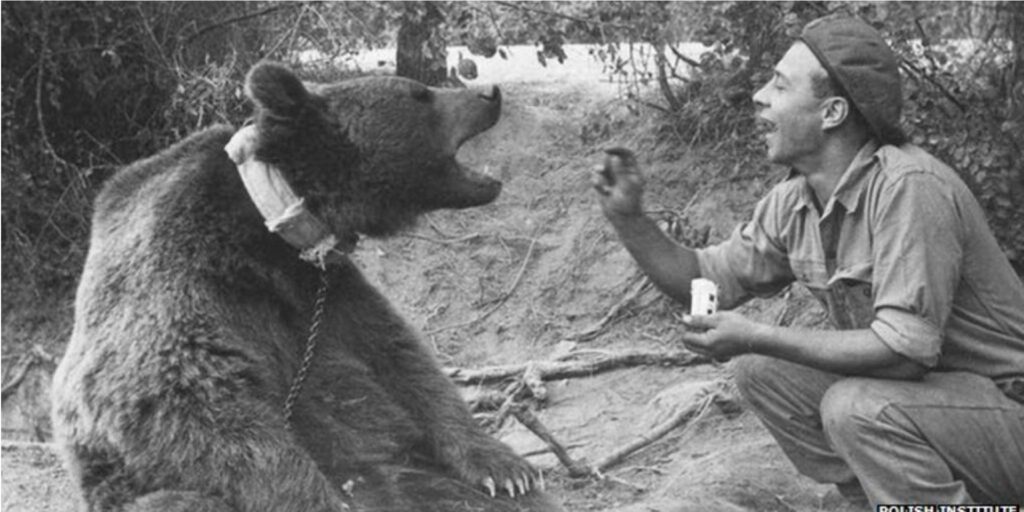 This #ForgottenFriday is all about Wojtek the bear! 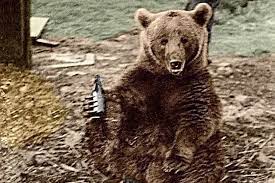 Many of us have grown up with the adventures of Paddington Bear, but few people know about the remarkable story of Wojtek, the brown bear who served in the Second World War!

Originally from Syria, Wojtek, nicknamed ‘Soldier Bear’, was adopted by the 22nd Transport Company’s Artillery Division in the Polish II Corps in 1942, after an Iranian boy traded the bear for food. He served alongside his human comrades during the Italian Campaign and became a lasting symbol of Polish comradeship.

Wojtek was found in April 1942 as a cub in the Zagros mountains of Persia (now Iran) by Polish P.O.W.s who were being transported from a Siberian gulag through the Middle East to Alexandria in Egypt. At the time he was being looked after by a Iranian boy who had found the cub after his mother had been killed by hunters. Lieutenant Anatol Tarnowieckikept decided to keep and raise the bear, after he saw what a calming influence the bear had over his men. They fed him condensed milk from a bottle and used cloth as a teat. The bear was named Wojtek and became more than a mascot, but another person of the unit, smoking cigarettes which he later ate, drinking beer and play wrestling with the men. He was treated like another soldier in the army and adored by everyone. 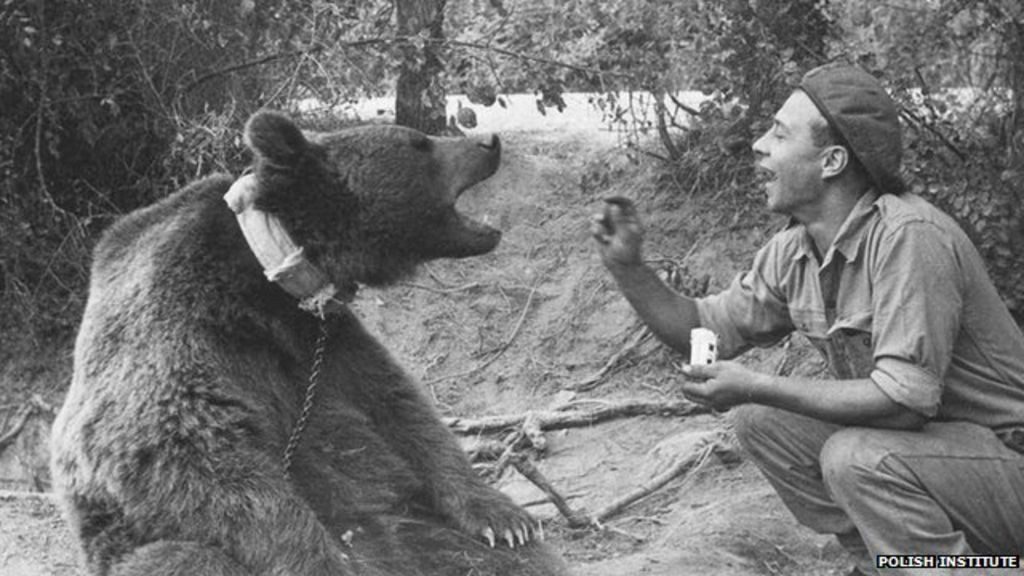 Allied leaders made a pact with Stalin that Polish prisoners would be released to help Allied troops in Italy. From Egypt, the men were shipped to Europe, along with the bear, where they assisted Allied troops during the Battle of Monte Cassino which was a significant battle during the Italian Campaign of the war. Wojtek was officially enlisted as an honourary soldier and was given the rank of Private, a serial number and even a pay book as animals weren’t allowed on campaign. The 22nd Company was one of the artillery units tasked with delivering ammunition to the front line. Wojtek was part of these efforts, carrying empty ammunition boxes from the lorry so they could be refilled and supposedly even helping to load guns! By the end of the war, he had been promoted to the status of Corporal and was a familiar sight on the battle ground. 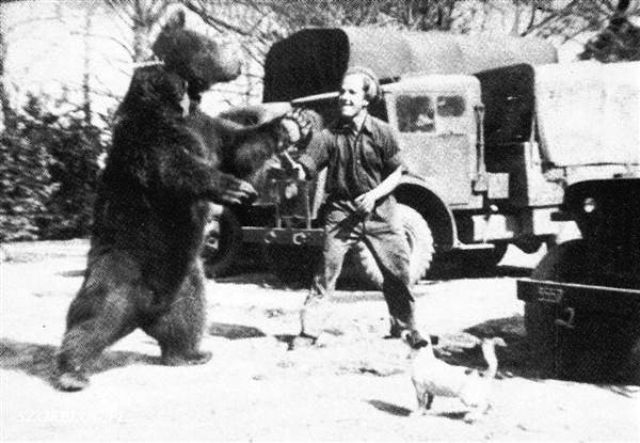 After the end of the war, Polish troops were scattered across the globe. Wojtek’s caretakers did not want him to return to Soviet occupied Poland and become a symbol of Communism. This did not happen and the bear instead went to Winfield Airfield in Hutton in Berwickshire, Scotland on the 26th October 1946 where 22nd Company was billeted. Wojtek was one of three thousand men on the camp and left him mark on the lives of the camps’ inhabitants and the residents of the village. The local children would take it in turns sitting on his back and the bear even attended local dances with the soldiers. Although nothing of the camp remains today, on a particular tree you can still see scratch marks where Wojtek climbed his favourite tree. When the soldiers began to leave the camp, a decision had to be made about what to do with the bear. This marked the end of his “human” life as Wojtek was taken in by Edinburgh Zoo where he lived out his retirement until his death in 1963 at the age of 21. Soldiers visited him while at the zoo and he was said to perk up at the sound of familiar Polish voices. 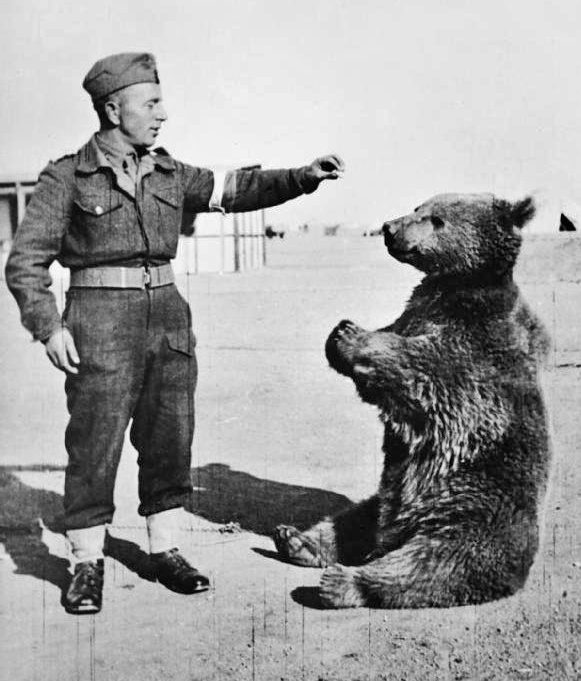 Wojtek’s Memory
The bear became a significant source of entertainment and morale for Polish troops during the war. To this day, Wojtek remains an important symbol of Polish comradeship and the 22nd Artillery Supply Company changed its insignia to represent this. The insignia now depicts an outline of a bear carrying an ammunition box as a reminder of Wojtek’s service during the war. A memorial of the bear was also unveiled in Edinburgh’s Princess Street Gardens in November 2015 to commemorate the extraordinary life of the brown bear. 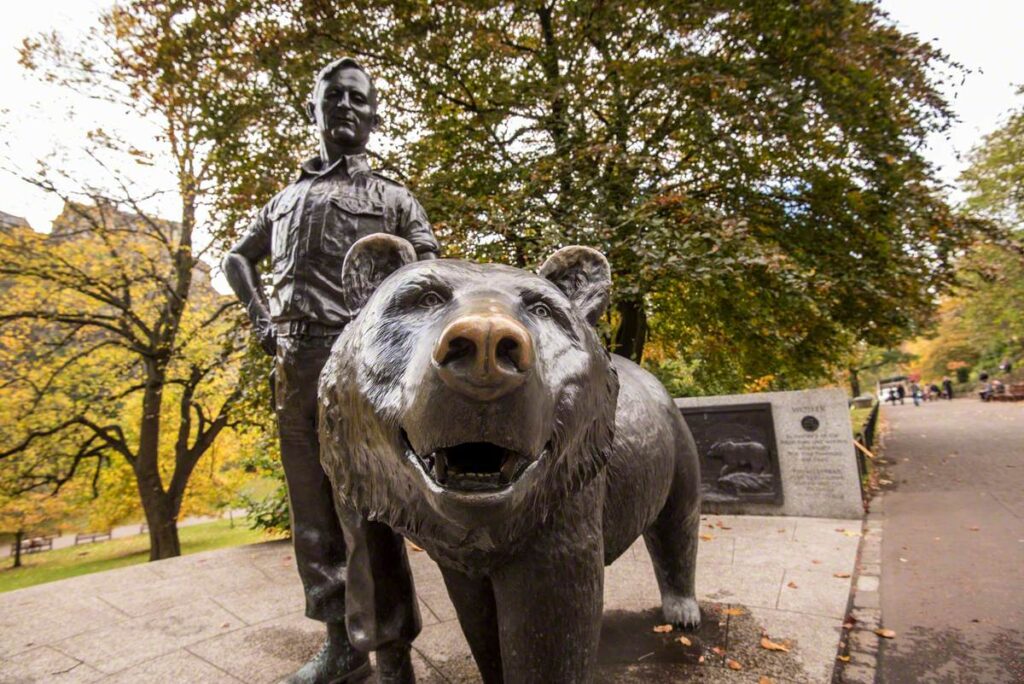